Prayers, discussions and large gatherings were held on the occasion of Mourning Day at Biyaghat in Gurdaspur. On the occasion of the 47th martyrdom anniversary and national mourning day of the great architect of freedom Bangabandhu Sheikh Mujibur Rahman, the great architect of freedom, the discussion meeting and doa mahfil were held at Sabgari Hat of the upazila organized by Biaghat Union Awami League.

Gurdaspur Upazila Awami League President Advocate Anisur Rahman Sarkar was the special guest, under the overall supervision of former UP Chairman Md. Mozammel Haque, the national flag was lowered to half-mast and the party and black flags were hoisted, wreath laying on the portrait of Bangabandhu, discussion meeting and prayer ceremony were held and present. Khichuri has been distributed among thousands of people. 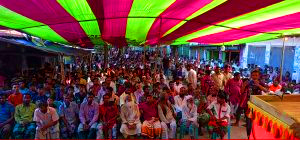