Water fish have a good reputation for drying. In the monsoon season, the people of this area are changing their fortunes by making dried fish in the larger challanbil of sitting on the side of the road along the river bank. Apart from different parts of the country, the low-income people of those areas are earning huge amount of foreign currency by exporting abroad. They are also contributing to the national income.

Thousands of men and women are busy drying dried fish in Bilsha, Sabgari, Pipla, Khubjipure, Singra Krishnapur, Nurpur, Bamihal, Chatmohar in Pabna and Mahishluti in Tarash Ujela in Sirajganj.
It is learned that thousands of workers in 12 upazilas of five districts of Chalanbilanchal are spending their busy time. Dried challan bills made by men and women are now leaving the country and going abroad. There is no denying the contribution of women in making shuntki. However, it is possible to earn a huge amount of foreign currency by processing these dried fruits in a planned and scientific way and exporting them abroad. Therefore, it is necessary to take necessary measures on an urgent basis. 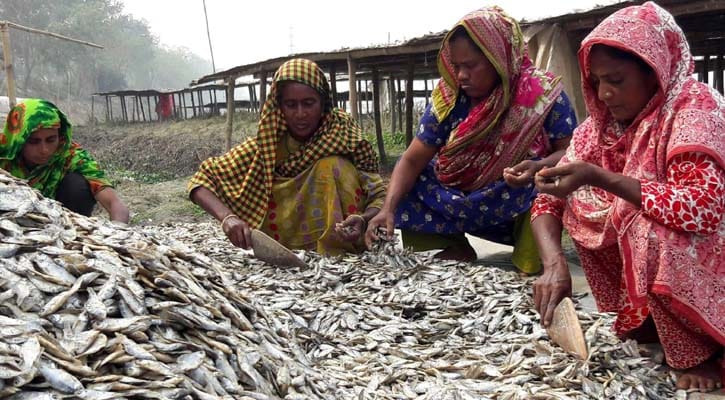 In the greater Chalanbil region of North Bengal, in the areas of Sirajganj, Pabna, Natore, Bogra and Rajshahi, shuntki is being made in the traditional way. Their work begins as soon as the light of dawn begins. How much more work to salt the fish, measure it, carry it to the scaffolding, sort it and dry it. And most of these jobs are in the hands of women. The moneylender is free from liability only by buying fish. Chalanbil Sweet Factory. Most of the fish from Chalanbil come to the warehouses and markets of the district and upazila headquarters. From there, the wholesalers bought small and big fish for drying. However, December-January is the huge fish season. At that time the collection of dried fish was more. This is when the rain water dries up.

Chatmohar’s dried fish trader A. Malek said that the demand for Chalanbil dried fish is high in the country and abroad due to its good taste and quality. From the month of Ashwin, drying of fish has started in the dry land. The drying work lasts till the month of Agrahayan-Paus. Dry traders from different parts of the country have set up fish drying sheds. This business can be started with a capital of 3 to 4 lakh rupees.

Abdus Salam, a dry goods trader from Sabgari village in Gurudaspur and Afzar Hossain from Bilsha village said that when the water receded, sontijal leaves were planted in different parts of the beel. Putti, khalse, chela, tengra, batashi, shrimp, nala, taki, guchi, baim, boal and other species of fish are caught in the net. These fish are dried in the attic, processed and sent to different parts of the country. Dried fish is sold at Rs 250 to Rs 800 per kg.

Mamena, Shefali, Rajab Ali, Rita Rani, Rajufa Bewa and Rina Khatun, who are engaged in making dried fish, said that 1 kg of dried fish is made by drying 3 kg of fresh fish. This business is financially viable as well as the risk in this business is much higher. If not properly cared for, dried fish can be damaged by insects. Besides, if the weather is bad, if there is no sun, you are in danger.

Some of the owners of the dried up villages said that thousands of workers are now working in these dried up villages run on leased government land. Not just in the sun, but in the middle of the day. If the sun is low, it takes three to four days to dry. Again, if the sun is high, it becomes dry in a day. However, some big fish take a little time again. They don’t even have to buy fish for these six months. The moneylender feeds regularly. They are happy to work for low wages. These simple workers of the village are a little satisfied. So even if you work non-stop all day, there is no impression of pain on your face. The moneylenders are always good at this strong performance of these workers.

The Natore District Fisheries Officer said that all in all, there is no doubt that the country’s economy would be greatly improved if the crops and fishes of this region, known as the Grain and Fisheries Reserve of the Circle Chalanbil, could be properly preserved.