Poverty has been his constant companion since his student life. There is a great interest in learning from the lack of it. And from that interest started thinking about the IT world. I am talking about  young entrepreneur Mustakim Jony. His home is in the village of Nachiar Kandi in the border area of ​​Singra in Natore and Gurudaspur in the area of ​​Junaid Ahmed Palak, Minister of State for IT.

Mustakim Jony is the founder of Digital Air. The popularity of his digital air is now across the Worldwide. The young entrepreneur now dreams of building his institution as an institute. Working with that conviction, he has set up an IT company called “Digital Air”. From where innumerable people are taking service in IT sector. 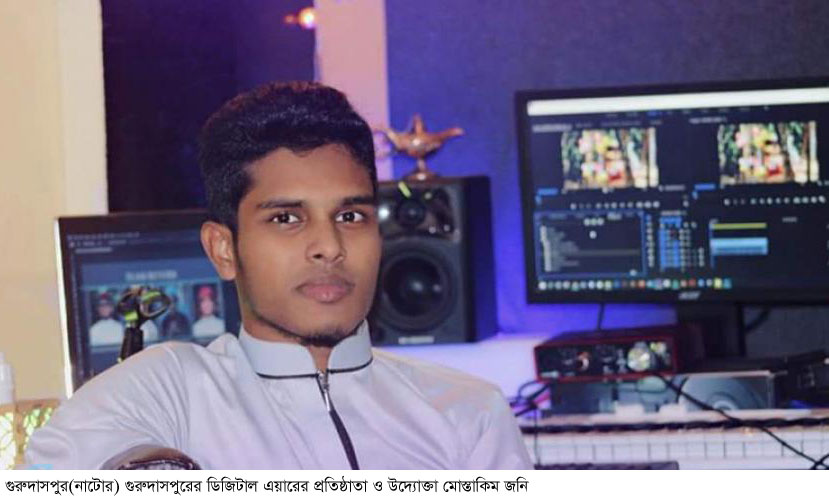 He started the company on the advice of one of his older brothers, Mustakim Jony, who was awarded in IT. Now more than 50 young people are working in his organization and they have different manpower in each sector. “I have some friends who have won international awards for their work in IT,” said Jony. In 2014, I used to see them on Facebook giving a lot of success status with IT, then I think I would feel quite eager to see them. It was this desire that inspired him at one time. After seeing their work, one of the motivations to do better than them starts with his IT. He took computer training from a computer training center in 2014 and started working in the IT sector. Then he did not have to look back. Digital Air is providing services in various fields including web development, graphics design, video editing and digital marketing. Jony  is already working with clients in about thirty countries. In exchange for these jobs, he is earning foreign currency at home. This young entrepreneur dreams of building this organization as a big organization, where young people can build a career with training. In addition to education, young people can earn money from digital platforms.

Mustakim Jony, a young entrepreneur, said that the IT sector could play a big role in moving the country forward. With the advent of technology based businesses, people are increasingly turning to technology. People can take their business forward through digital marketing. So technology is an important medium. There is no substitute for technology to advance the country’s industrial trade, education and culture.

Many young people are frustrated with not getting a job, the government has made great strides in the field of technology, now anyone can build their career in technology if they want. Jony, the founding director of Digital Air and a young entrepreneur, thinks that there is a lot of potential to build a career in technology without giving up.

Gurudaspur Information and Communication Technology Assistant Programmer. Shahinur Islam said that according to their office, more than 1000 educated youths of Gurudaspur Upazila are earning huge amount of foreign currency through freelancing at home. Freelancers will grow at a higher rate in the next one year. However, these freelancers will also be given training officially. Besides, the upazila administration is also working to encourage newcomers to come for freelancing.