Representative of Gurudaspur (Natore).
In Gurudaspur, the playground has become completely useless due to the sand of that UP chairman. Students are not able to play. Filled with water and mud, a delicate situation has arisen.
Shawkat Rana Labu, president of the management committee of the madrasa, was occupying the madrasa ground and trading in sand. Labu is the chairman of Nazirpur Union Parishad. There is also a case in court against the chairman for giving government houses to the poor in exchange for money. He also worked in jail. Residents of the area said that there are also allegations against him for misappropriation of khas land.
According to the search, he used to bring sand in a trawler and pile it in the field and sell it in different places. Water is seeping into the classrooms of 3 buildings of the madrasa as sand is kept in the field like this. Teachers and students are suffering a lot in teaching in a mud-water classroom.
At least 10 students said that even though the madrasa was reopened after being closed for a long time, the president of the institution himself started throwing sand on the ground. Large piles of sand across the field have caused waterlogging in front of the classroom. Clothes are getting damaged in mud and water while entering the classroom. 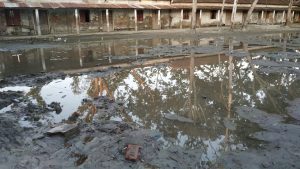 Acknowledging the plight of the teachers and students, the principal of the madrasa, Abdul Haque, said that the students could not play in the field as there was water and mud scattered all over the field. There is some difficulty in teaching as there is water in the field. However, the president said the field would be cleared very soon.
Madrasa Management Committee President UP Chairman Shawkat Rana Labu acknowledged the field, saying that despite the temporary suffering of teachers and students, the field will be renovated very soon. The headmaster has already been informed about the matter.
Gurudaspur Secondary Education Officer. Eyaheduzzaman said it was unfortunate if the students suffered from the water in the field. Prompt action will be taken to find out.