Raushan Ali of Aminpur Police Station has been selected as the Best Officer-in-Charge (OC) of Pabna District. The Superintendent of Police confirmed the matter on Thursday (October 8) afternoon. According to the office of the Superintendent of Police, he was declared as the best OC of the district at the monthly welfare meeting held on September 8.

The meeting directed all present to ensure proper security for the upcoming Durga Puja, conduct the Sujanagar UP elections properly and complete the process of recruitment of constables properly. At the beginning of the meeting, 12 officers and the force were awarded in recognition of their good work in September.

According to police sources, Aminpur Police Station OC Md. Raushan Ali was nominated as the best OC of the district for his effective and accurate execution of drugs, anti-terrorist activities in remote areas, recovery of weapons, supervision of community policing, tampering with warrants and various official activities. 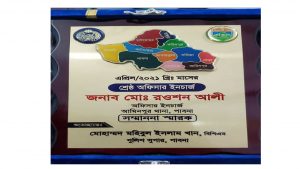 Earlier, he had won numerous awards as the best police officer in different districts and upazilas for successfully completing various activities. In the meantime, he has been declared Zero Tolerance against drug and drug dealers, arms dealers and terrorists. In remote Dhalarchar, he is playing a leading role in suppressing terrorism with courage. Mother is playing a big role in hilsa conservation.

OC Md. Raushan Ali said that the responsibility of working for the people increased after receiving the award of the best OC. May we retain this dignity of reward. At the same time, I will take more initiatives to gain the confidence of the general public. Come to the police station so that no one gets negative about the police. The police will be the friends of the people. Under the direction of SP Mahibul Islam Khan Sir, I am working relentlessly to set an example of people-friendly police. He thanked all the SIs, ASIs, constables and colleagues of the police station for their cooperation.