Gaibandha representative
A widow named Parul Begum, the mother of the deceased, has lodged a complaint against Bhabir at Gobindaganj in Gaibandha. Parul Begum’s youngest son Khorshed Alam was allegedly killed by his eldest son Abdul Wahab’s wife Maryam Siddique. The court took cognizance of the allegations and directed the Gobindaganj police station to take up the case and conduct an investigation. The incident took place in Baiguni village of Wazir area of ​​Shalmara union in Gobindaganj upazila. Although the case was recorded at the police station on September 26, the journalists could know about it on Friday afternoon.

According to the details of the case, Abdul Wahab Bepari, the eldest son of Parul Begum, wife of late Abdul Khaleq Bepari of Baiguni village in Wazir of Shalmara union of Gobindganj upazila, has been living in Dubai for about 10 years. About 8 years ago, son A.K. M Khorshed Alam was also taken to Dubai by his elder brother Abdul Wahab. Abdul Wahab’s wife Maryam Siddique lived in a separate house in the same village instead of her father-in-law’s house. While in Dubai, Khorshed used to send all his income to his elder sister Abdul Wahab’s wife Maryam Siddique. After staying in Dubai for two and a half years, Khorshed returned to the country. Maryam Siddika allowed Debor to stay at her house without returning the money sent by Khorshed. 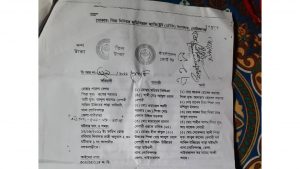 Meanwhile, Khorshed’s wedding day was fixed on September 13 in the neighboring village. The conflict started when Khorshed asked for 2 lakh rupees from his fiance Maryam Siddique for the expenses of the marriage. Maryam Siddique opposes the marriage and expresses inability to pay the deposit. Besides, Maryam’s son Mahmudul Hasan Bepari alias Manik and daughter Hira Khatun threatened and threatened Uncle Khorshed for asking for money and Manik got angry and set fire to Uncle Khorshed’s motorcycle. At one stage, on the night of September 12, at around 2.30 pm, Maryam Siddique, along with her brother Wazed Ali, son Manik and daughter Hira, woke Khorshed and took him to the roof of the house. There they tied Khorshed’s face, hands and feet and started torturing him. At that time, when Khorshed fell ill, he strangled him with a towel and campaigned for his normal death. While bathing the body, relatives and neighbors noticed signs of injuries on her body and neck and informed Parul Begum that they objected to burying the body. Even after that, Maryam Siddique and her brother Wazed Ali misunderstood all the neighbors and quickly buried the body.
Widow Parul Begum alleged that after killing her youngest son Khorshed Alam, the eldest son’s wife Maryam Begum hurriedly buried Khorshed’s body with her men to cover up the incident. In this case, the police took time to file a case and asked them to file a case in the court. On September 26, 14 days after the incident, Maryam Siddique (45), wife of eldest son Abdul Wahab Bepari, grandson Mahmudul Hasan Bepari alias Manik (24), granddaughter Hira Khatun (20) and Maryam Siddiqui’s brother Wazed Ali Sarkar (38) sought justice for Parul Begum’s son’s murder. Senior Judicial Magistrate Gobindaganj (Chowki) court. Judge Perth Bhadra took cognizance of the allegations and directed the Gobindaganj police station to take action within 24 hours. Accordingly, a case was registered at Gobindaganj police station on September 27. Meanwhile, after the incident, Maryam Siddique left the house with her children and went into hiding.
Gobindganj Police Officer-in-Charge (OC) AKM Mehedi Hasan said necessary steps were being taken to find out the real cause of death. The accused are on the run. An operation is being carried out to arrest them.